While out on a St Lucia World Heritage Safari one of our rangers came across a unqiue sighting, Rhino & Hippo Stand off, the two grunted and showed quite a bit of aggression towards one another during the time spent watching them. The clients aboard the safari vehicle where thrilled at what it was that they where witnessing to say the least. This was a first for the game ranger as well as this type of behaviour has not been witnessed previously while in the iSimanagaliso Wetlands Park.

After a lengthy show off the two decided that this behaviour was not acceptable and both turned away to continue grazing. With some amazing pictures and video the clients continued on towards Cape Vidal only to have ideal snorkeling conditions to themselves. All in all yet another magnificent day while on Safari. 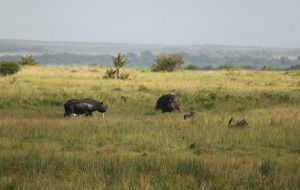